In contemporary decrease in perception of film and television through classical means, searching for new forms of audiovisual expression becomes indispensable in education of the rising generation. Creation and perception of emotional  structure by the means of contemporary film language is a challenging part of education of future film creators.

Dance film may be referred to  as a psychosenzoric perception without verbal communication, convenient for collective school work. In this work dance is referred to as a form of nonverbal expression in shot by shot continuity, where picture and sound plays active role. The text analyses system of practical teaching of movie language by the means of transformation of scenic art into the art of motion picture. It designates main differences between the recording of scenic art and active creation of dance film. If a student is delimited in the creation of school work, thus he does not use speech, but dance movements recorded by the elements of film language, it is possible for him to learn new forms of expression by the means of motion picture and sound. Furthermore this article offers the analysis of elementary elements of expression by the means of film language in dance movie in the form of dynamic composition, movement of camera, characters and in addition film cut and sound track. The text originated from my pedagogical experience during the dance film student project. 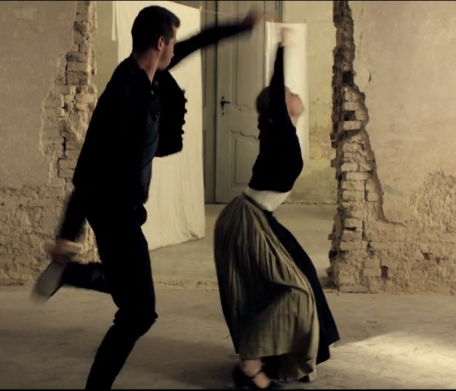